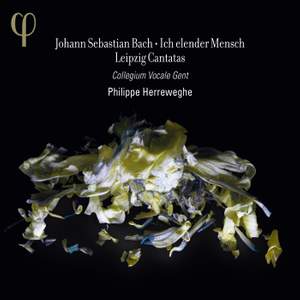 For the second time on the Phi label, Philippe Herreweghe presents four Bach cantatas written during the first year the composer spent in Leipzig.

In relation to the repertoire composed in Weimar, the instrumentarium is enlarged to adapt to the size of the churches of Saint Thomas and Saint Nicholas.

But, above all, the instrumental virtuosity is much greater, as are the vocal demands confronting the choirs and solo singers, trained at the time by Bach himself.

The Collegium Vocale Gent, under the direction of Philippe Herreweghe and in the company of top-notch soloists (Dorothee Mields, Damien Guillon, Thomas Hobbs and Peter Kooij), show us in dazzling fashion to what point the composer endeavoured to create veritable musical sermons going far beyond a simple musical setting of the text. By way of a bonus, the album contains a magical little piece, Komm, Jesu, komm by Johann Schelle, one of Bach's predecessors in Leipzig.

Neither drivingly rhythmic like John Eliot Gardiner's cycle, nor thin like some of the one-to-a-part versions, it is deftly poised and dancing.