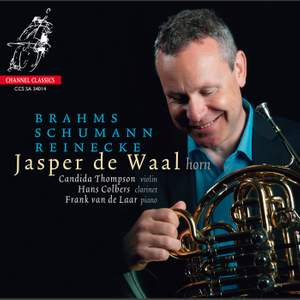 The superb cornist Jasper de Waal and his colleagues give a truly inspired account of the Brahms...The recording is perfectly balanced and real. — Gramophone Magazine, June 2014

Jasper de Waal celebrates with this cd his twenty-fifth anniversary as a professional hornist. He has a very soft spot for chambermusic. The three composers featured here, Brahms, Reinecke and Schumann, do nothing to hide their fondness for the sound of the horn; their passion, is evident in all three pieces. They make wonderful use of the instrument's potential and the typical character of its sound in combination with the other instruments.

The Trio for horn, violin and piano by Brahms is one of the highlights of the entire chamber music repertoire, the Adagio and Allegro for horn and piano by Robert Schumann is a milestone in the development of the horn and Reinecke's trio marked the beginning of Jasper de Waal’s career - he played it at his final exams twenty five years ago at the Tilburg Conservatory.

Jasper de Waal has occupied the position of first horn with the Royal Concertgebouw Orchestra from 2004 until 2012. He won several regional music competitions for young musicians in 1983 and 1984. Jasper de Waal graduated from the Brabant Conservatory, Tilburg, in 1988. He then received a diploma in performance from the Royal Conservatory of the Hague in 1990. He played first horn for the Residentie Orchestra of the Hague from 1990 through 2004.

Jasper de Waal has given solo concerts, recitals, and master classes all over the world. He is a member of the visiting faculty of the Conservatory of Amsterdam. Jasper can be heard as a soloist on dozens of recordings of the Royal Concertgebouw Orchestra led by chief conductor Mariss Jansons.

The superb cornist Jasper de Waal and his colleagues give a truly inspired account of the Brahms...The recording is perfectly balanced and real.