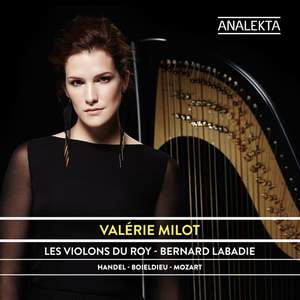 It is with obvious artistic complicity that these talented Québec musicians present, on this album, a repertoire of great significance, and three important moments in the history of this fascinating musical instrument called the harp. Valérie Milot's very refined style is as impressive as her flawless technique and her powerful and colourful playing.

Wolfgang Amadeus MOZART wrote the Concerto for Flute, Harp and Orchestra K.299 while visiting Paris with his mother, where he was the composition professor for the Duc de Guînes' daughter. The Duc, a flutist, requested a piece that could be performed alongside his daughter, a harpist. This exquisite concerto was added to Mozart's catalogue, and is recorded here alongside incomparable flutist Claire Marchand.

True to himself, Georg Friedrich HÄNDEL took advantage of the harp's beautiful sounds in order to show off his own exceptional sense of colour and brilliance. Valérie Milot delivers here an outstanding performance of Handel's magnificent Concerto in B flat major (Opus 4, no. 6).

François-Adrien BOIELDIEU's Concerto in C major, a masterpiece of the harp repertoire, joins this trio of concertos with a refreshing, energetic and exhilarating first movement; a testament to the creativity of this composer whose reputation is largely based upon his operas. This recording puts Valérie Milot's powerful and remarkable style on display, and through the energy and vitality of Les Violons du Roy, the harp finds a different voice.