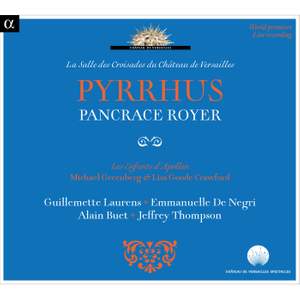 This world première recording, with a first-rate cast, brings to light a major work of the French operatic heritage. Pyrrhus by Pancrace Royer (also noted for his very fine – and virtuosic – harpsichord music) was first performed early in the reign of Louis XV. It is one of the twenty-one tragédies lyriques on the subject of the Trojan War that were performed at the Académie Royale de Musique (the Paris Opéra) between 1687 and 1730.

Royer's music is certainly elegant and pleasingly melodic...Particularly impressive are the dramatically volatile exchanges between Pyrrhus, sung with commanding tone by Alain Buet...the orchestral performance is expert and suitably expressive; the drama also moves at a convincing pace.

this tragédie lyrique shows a totally natural skill in vocal declamation and a powerfully intense response to the favourite subject of the Trojan war. The performance is mixed, but Emmanuelle de Negri as Polyxène and Alain Buet as Pyrrhus both rise to heights of eloquence.