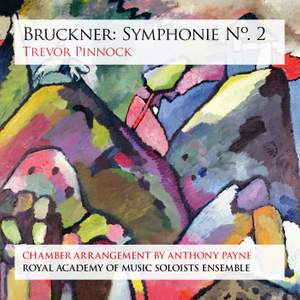 The scale of Bruckner’s symphonic vision and the weight of his musical ideas are certainly preserved, and the performance is indeed persuasive...There are too many sublime moments to pick out... — MusicWeb International, 15th May 2014 More…

This is the second in the series which sees Trevor and the Academy perform and record works which are retrospectively reigniting Schoenberg’s vision of performing chamber reductions of symphonic repertoire.

This brand new edition was commissioned by Royal Academy of Music Principal Jonathan Freeman-Attwood who asked composer Anthony Payne (of Elgar’s Third Symphony fame) if he would adopt the principles of Schoenberg’s Society in a new version of this symphony.

Whilst employing a slightly larger ensemble than the core group used by Schoenberg, this scoring serves to reveal the luminescent appeal of a little-known nineteenth-century masterpiece - whilst also extending Schoenberg’s and his pupils’ practice of refined intimacy.

Upon hearing the recording Anthony Payne remarked ‘the arrangement exceeded my most extravagant expectation… performed magnificently under Trevor Pinnock's direction by one of the finest chamber groups I've heard.’

Rounding off this recording is Strauss’ Wein, Weib und Gesang arranged by Alban Berg, whose own pieces were regularly performed by the Society.

Trevor Pinnock is known worldwide as a harpsichordist and conductor who pioneered performance on historical instruments.

2014 sees him return to the English Concert, which he founded, to celebrate its 40th anniversary at Wigmore Hall, where he will also give a solo harpsichord recital.

In 'Pinnock's Passions', Trevor will curate four themed concerts with guest musicians and speakers at the new candlelit Sam Wanamaker Playhouse at The Globe.

During 2014 The Royal Academy of Music Soloists will join Trevor for the third in a series of recordings of music arranged for Schoenberg's private concerts.

The scale of Bruckner’s symphonic vision and the weight of his musical ideas are certainly preserved, and the performance is indeed persuasive...There are too many sublime moments to pick out individual sections, and I have no arguments with Trevor Pinnock’s conducting.