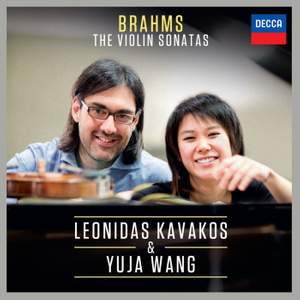 Kavakos opts for a subtle use of vibrato and a relatively limited dynamic range. His sweet tone is matched by Wang...these performances may seem restrained and almost Classical in outlook. Yet... — BBC Music Magazine, June 2014, 4 out of 5 stars More…

Brahms: Scherzo in C Minor for Violin and Piano (from the F-A-E Sonata)

‘It’s a long time since there was a new version of this concerto as good as this.’ Andrew Clements, The Guardian (October 2013).

‘There is a rapier-like cut-and-thrust about this performance that recalls the surging adrenaline-charge of Isaac Stern in full flight, with Kavakos emerging as the swashbuckling hero of the hour, taking all technical obstacles in his stride with soaring abandonment.‘ Julian Haylock, Sinfini (October 2013).

For the three sonatas Kavakos – an exclusive Decca artist – teams up with Wang, a former Gramophone Young Artist of the Year.

Their partnership at the 2013 Verbier Festival was much talked about (and broadcast on Medici) and they will be touring these works in April to major European cities.

The F-A-E Scherzo which Brahms contributed to a composite sonata (along with his friends Schumann and Dietrich) will be added as a bonus.

The three violin sonatas were written for Brahms’s muse in all matters violin, Joseph Joachim, who also gave the premiere of the Violin Concerto and contributed its cadenzas.

Kavakos opts for a subtle use of vibrato and a relatively limited dynamic range. His sweet tone is matched by Wang...these performances may seem restrained and almost Classical in outlook. Yet this reticence serves to give greater intensity to those few passages...where both players become more expansive in expression.

Wang and Kavakos give consistently outstanding performances. Wang has a way of making even the most complex passages beautifully clear. Without over-emphasising turning points in the harmony, she's able to point the music's direction of travel...Kavakos similarly delights in finding an ideal expression for each phrase.