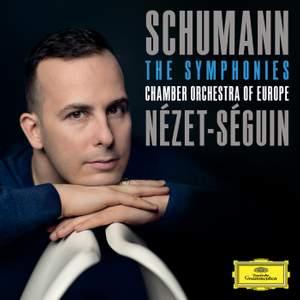 These enormously invigorating and brilliantly executed performances...quash once and for all the old age that Schumann's Symphonies are deficient in their treatment of the orchestra...Nézet-Séguin... — BBC Music Magazine, May 2014, 5 out of 5 stars More…

For these revelatory performances - captured live at acclaimed concerts in Paris - he conducts the superb Chamber Orchestra of Europe, one of the world’s preeminent chamber orchestras.

“Of all the major symphonies, I’d say that Schumann’s are best performed by a slightly smaller ensemble… With a lean string section – not only in size, but also in its quality of playing – the music just works.”

The Canadian Maestro sees Schumann’s music as rooted in the bipolar nature of the composer’s troubled psyche, emphasising dramatic shifts of temperament - not only between movements but even within a single phrase

“He’s one of those composers whose personality is completely expressed in their music…those fluctuations between the melancholy and something very inward-looking are combined with a very manic kind of energy that wants to conquer the world. That’s what is so special about Schumann.”

This new cycle includes the second, revised version of Schumann’s second symphony, published as his Symphony No.4. “I try to respect whenever a composer makes a revision because he feels the need to, rather than because of any outside pressure. I’m personally convinced that the symphony’s message, and this feeling of one big movement, is better conveyed by the later version.”

This set is Yannick Nézet-Séguin’s first recording of a complete symphony cycle.

These enormously invigorating and brilliantly executed performances...quash once and for all the old age that Schumann's Symphonies are deficient in their treatment of the orchestra...Nézet-Séguin has an instinctive grasp of Schumann's fluid lyrical melodic style, responding with great sensitivity to those moments in the musical line where the harmony is at its most intense.

Nézet-Séguin here offers true 'Schumann-lite' in performances that pay close attention to detail but don't stint on personality...[His] response to Schumann's sound strategies are most revealing in the Rhenish....a heavyweight contender in a far from uncrowded corner of the market.

these freshly conceived, youthful and vigorous accounts, banishing all hints of the portentousness of the old German school: the works are spring-cleaned.