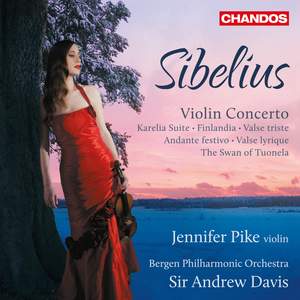 this enjoys one of the finest ever actual recordings...giving Jennifer Pike's violin a tremendous sense of presence. And she plays it with impressive mastery. She inclines to the bittersweet... — BBC Music Magazine, May 2014, 5 out of 5 stars More…

Jean Sibelius is perhaps best known for his seven great symphonies but there is also a large body of music for the concert hall, the theatre, and the salon, some of which is explored on this release. The Violin Concerto in D minor, Sibelius’s only full-length concerto, marries brilliantly idiomatic writing for the solo instrument with the seriousness characteristic of the symphonies. Intensely virtuosic, it is both a dramatic and a deeply romantic work. The Swan of Tuonela comes from the suite of four Lemminkäinen Legends, inspired by traditional Finnish myths. In it the majestic motion of the swan is evoked by the arching phrases of the cor anglais. Also featured are two well-known shorter works indelibly linked with Finnish identity.

Finlandia became a national emblem of the Finnish struggle for independence from Russia while Andante festivo is a staple of Finnish public occasions. The Karelia Suite is another patriotic work, the rough-hewn character of its three movements intended to evoke a folk-like authenticity.

Sir Andrew Davis continues his relationship with the Bergen Philharmonic Orchestra in this their third recording together on Chandos. They are joined in the Violin Concerto by Jennifer Pike, one of the brightest young violinists performing today.

this enjoys one of the finest ever actual recordings...giving Jennifer Pike's violin a tremendous sense of presence. And she plays it with impressive mastery. She inclines to the bittersweet Tchaikovskian view...This is a marvellously warm, flowing and passionate performance...Davis matches her with a rich-textured, powerful reading.

I’d place [Pike] at the cooler end of the spectrum. The strong points of her reading are attention to dynamic variance and to rhythmic imperatives. She also takes the music at a sensible pace, her rubati flexible but never distended, supporting an interpretation that is refined, fluent, and structurally confident.

This is an exceptionally fine reading of a testing concerto...She catches the sinuous ethereality of Sibelius’s vision, and the loneliness as well, but there’s plenty of passion where it matters and tremendous technical skill.