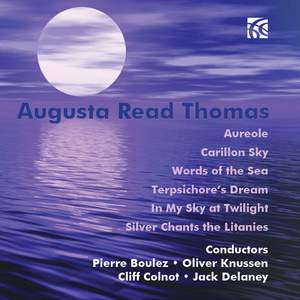 The performances are as persuasive as expected given the involvement of such as Pierre Boulez and Oliver Knussen...One can only await Vol. 2 of this series with impatience. — Gramophone Magazine, April 2014 More…

Thomas, Augusta: Words of the Sea

III. …beyond the genius of the sea…

IV. …mountainous atmospheres of sky and sea - homage to Debussy

Thomas, Augusta: In My Sky at Twilight

I. Deeper than all roses

Among today's composers, Thomas has remained consistent in blazing her own path. In this she has undoubtedly been aided by her cosmopolitan training, having studied with, among others, Alan Stout (Northwestern University, 1983-87), Oliver Knussen (Tanglewood, 1986, 1987, 1989) and Jacob Druckman (Yale University, 1988), as well as one final year in London at the Royal Academy of Music (1989).

Her music has travelled worldwide over the years through the advocacy of figures such as Mstislav Rostropovich, Pierre Boulez, Daniel Baremboim, Christoph Eschenbach, Oliver Knussen, Esa Pekka Salonen, William Boughton and Sir Andrew Davis among many others. But names, appointments and honours in themselves cannot give an indication of what Thomas' music sounds like. And the music itself defies any easy verbalisation. Divining influences can give some indication as long as it is borne in mind that knowledge of said influences is no substitute for listening to the actual music. Thomas' long-standing study of Jazz has imparted a sense of rhythm notable for its combination of drive and elasticity. Figures as diverse as Byrd, Bach, Chopin, Mahler, Debussy, Berg, Stravinsky, Berio, Knussen, George Benjamin, Ellington,

Coltrane and Dutilleux certainly furnish clues as to how Thomas' music has attained its formal fluidity, a lyricism high-flown and diaphanous by turns, a harmonic language that can move between tart, flavoursome dissonance and warm consonance with an enviable naturalness, and an orchestrational instinct of pyrotechnic virtuosity.

The performances are as persuasive as expected given the involvement of such as Pierre Boulez and Oliver Knussen...One can only await Vol. 2 of this series with impatience.

Thomas's confident handling of a chamber orchestra is perhaps the most impressive aspect of the pieces in this collection...Terpsichore's Dream for chamber orchestra from 2007 is a parade of glittering musical images that steadily gains energy; it would make a great work-out for any ensemble.