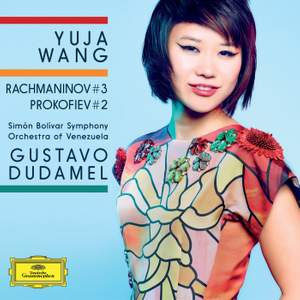 Making her virtuoso credentials clear throughout, Wang dismisses every difficulty with nonchalant ease...this is a talent with a vengeance, the youthful partnership with Dudamel is ideal and... — Gramophone Magazine, February 2014 More…

Twenty-four year old Chinese pianist Yuja Wang is widely recognized for playing that combines the spontaneity and fearless imagination of youth with the discipline and precision of a mature artist. Regularly lauded for her controlled, prodigious technique, Yuja’s command of the piano has been described as “astounding” and “superhuman,” and she has been praised for her authority over the most complex technical demands of the repertoire, the depth of her musical insight, as well as her fresh interpretations and graceful, charismatic stage presence. Following her San Francisco recital debut The San Francisco Chronicle wrote “The arrival of Chinese-born pianist Yuja Wang on the musical scene is an exhilarating and unnerving development. To listen to her in action is to re-examine whatever assumptions you may have had about how well the piano can actually be played,” and The Washington Post called Yuja’s Kennedy Center recital debut “jaw-dropping.”

Making her virtuoso credentials clear throughout, Wang dismisses every difficulty with nonchalant ease...this is a talent with a vengeance, the youthful partnership with Dudamel is ideal and both performances, recorded in Caracas, are understandably greeted with storms of applause.

It’s a virtue rather than a shortcoming that Wang and Dudamel never push the music too hard or too fast...Where oomph is required, all concerned on DG can and do apply it.