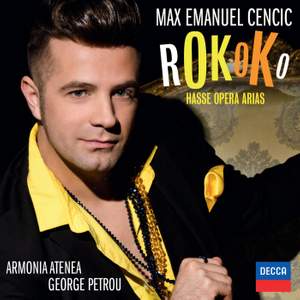 From the exquisite delicacy of the aria di sostenuto to the fiery passion of the aria di bravura, Cencic’s sensational performance brings Hasse’s greatest works to a new audience, brilliantly fresh and with maximum effect

Rokoko follows on from Cencic’s incredibly well received Alessandro on Decca Classics. Critics from the world’s leading press recognised the album’s outstanding qualities: Gramophone described it as “an essential purchase”; Opera News observed that Cencic “commands the music totally”, while Diapason awarded it Diapason de l’or de l’année and it also won recognition in the International Opera Awards in London

For this new recording Cencic is accompanied by the superb Armonia Atenea under their internationally-renowned conductor George Petrou.

Cencic's easy command of the craziest diminutions - the length, rapidity and range of which challenge the physically possible - shows why Hasse's music enthralled audiences. Authority abounds: Cencic leaps elegantly across his register, and the band intervenes in delightfully unexpected ways.

Whatever the piece, one hears Cencic at his best, in quality of voice and in his control of it...These Hasse arias would make a worthy introduction to Cencic's abilities for anyone who has yet to make his acquaintance and are confirmation for his admirers, should they need it.