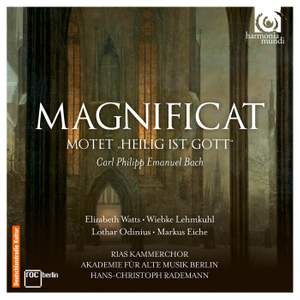 a fine reconstruction of the second half of a concert [CPE Bach] conducted in Hamburg on Palm Sunday, 1786. So vivacious is the choral singing and orchestral playing under Hans-Chrisoph Rademann... — BBC Music Magazine, April 2014, 4 out of 5 stars More…

To mark the tercentenary of the birth of Johann Sebastian Bach’s fifth (and most prolific) child, Hans-Christoph Rademann directs the RIAS Kammerchor and Akademie für Alte Musik Berlin in a ‘punchy and agile’ account of his first large-scale choral work.

On April 9, 1786, Carl Philipp Emanuel Bach conducted a charity concert in Hamburg featuring three of his finest and most representative works: the Symphony Wq 183/1, the Magnificat (written in 1749 in the hope of succeeding his father as Cantor in Leipzig) and his stupendous 'Heilig' for double choir, of which he wrote, "It will be my swan song of this kind, and will serve to ensure that I shall not soon be forgotten after my death."

Released to celebrate the 300th anniversary of the composer's birth, this recording recreating the programme of this historic concert confirms the prophetic nature of the composer's words. Hans-Christoph Rademann leads the RIAS Kammerchor, Akademie für Alte Musik Berlin and a stellar cast of soloists (including soprano Elizabeth Watts) in definitive recordings of these fascinating and innovative works.

a fine reconstruction of the second half of a concert [CPE Bach] conducted in Hamburg on Palm Sunday, 1786. So vivacious is the choral singing and orchestral playing under Hans-Chrisoph Rademann that it's a shame they did not include every work from that occasion.

Rademann and his Berlin forces make the strongest possible case for it, with fresh, athletic choral singing, playing of crackling, fizzing energy and excellent solo work...This is the finest recording of CPE’s choral masterpiece I have heard....set to be one of the discs of the CPE anniversary year.

’Vitality’ is the essential ingredient of the performances recorded here … Elizabeth Watts shapes her phrases beautifully with a sure sense of direction … thrilling stuff.

Hans-Christoph Rademann gets some splendid playing from the Akademie für Alte Musik Berlin and directs the performance with flair and evident empathy for the music.

There are some really sumptuous sonorities in this music and the temptation in performance must sometimes be to overplay them. That is never the case here though, as the careful balance between expression and restraint seems very well judged throughout.

Chorus and orchestra launch the work in exhilarating style, as Bach emulates his father’s trumpety celebratory style, but with Vivaldian panache...This is a glorious disc.

The three works featured here represent what C P E Bach considered his finest achievements...The arias and chorales in his Magnificat echoes his father J S Bach’s Mass in B minor, as if emphasising his lineage... rendered with grace by the Akademie Für Alte Musik Berlin.

Hans-Christoph Rademann finds eloquence in the choral music and lets the Berlin Akademie rip with edgy tone in the symphony.

The energetic and committed performances of the Akademie fur Alte Musik Berlin and the RIAS Kammerchor under Hans-Christoph Rademann make this music a joy to listen to ... an excellent introduction to C.P.E Bach’s work.