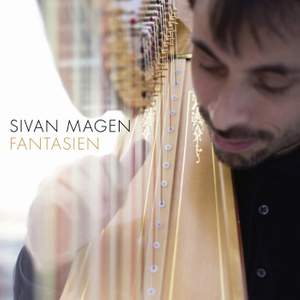 In the wrong hands CPE Bach's H277 Fantasy can easily disintegrate into series of rhetorical gestures, but Magen takes us into a rarefied of magical colours and dynamic shadings that creates... — BBC Music Magazine, April 2014, 5 out of 5 stars More…

II. Intermezzo in A Minor

I. in E-Flat Major

Harpist Sivan Magen dazzles audiences wherever he goes with his formidable virtuosity and demonstrably perfect technique. Recorded at the famous Yehudi Menuhin School in Surrey, ‘Fantasien’ marks Magen’s Linn debut. The recording is a showcase of the modern concert harp demonstrating the powerful expression, dynamic range and sheer excitement this popular instrument can generate in the right hands.

Featuring transcriptions of works by J.S. Bach, C.P.E. Bach, Mozart and Brahms plus original harp compositions by the lesser known Henriette Rénie and Ekaterina Walter-Kühne, ‘Fantasien’ is united by the theme of fantasy.

Sivan Magen has recorded two previous albums, both of which received critical-acclaim; his Britten recital was listed in the New York Times’ ‘Best Recordings of 2012’.

Praised by the press as ‘a magician’ (WQXR, New York), of ‘unheard of depth of colours, range of expression and rhetorical flow’ (American Record Guide), Sivan Magen is the only Israeli to have ever won the prestigious International Harp Contest in Israel. Magen also won the Pro Musicis International Award in New York and the Borletti-Buitoni Trust’s 2012 Award for exceptional young musicians.

In the wrong hands CPE Bach's H277 Fantasy can easily disintegrate into series of rhetorical gestures, but Magen takes us into a rarefied of magical colours and dynamic shadings that creates the strange impression of the notes floating free of musical gravity.