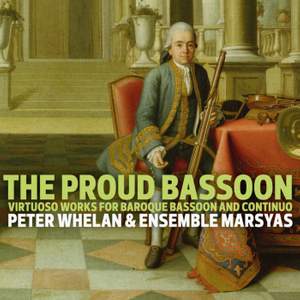 Late Baroque composers were attracted by the expressive character of this mellow, darkly coloured instrument, and Peter Whelan explores its potential with affection and technical assurance...A... — BBC Music Magazine, May 2014, 5 out of 5 stars More…

Boismortier: Sonata in G Major for Bassoon and Continuo, Op. 50 No. 2

Boismortier: Sonata in G Major for Bassoon and Continuo, Op. 50 No. 2: Allemanda

Boismortier: Sonata in G Major for Bassoon and Continuo, Op. 50 No. 2

Boismortier: Sonata in E Minor for Bassoon and Continuo, Op. 50 No. 1

‘The Proud Bassoon’ marks the debut solo recording of Peter Whelan, singled out for praise in his performances with the Scottish Chamber Orchestra and Ensemble Marsyas.

This unique album is a collection of the very best of the virtuoso solo music composed for the galant French styled baroque bassoon. Included are a wide range of works composed for the court, the Opèra, for the home and from the street, brought back to life by Peter and special guests Ensemble Marsyas.

The basson or bassoon inspired many now forgotten high-level artworks by the greatest French composers. As the leaders in musical fashion, they in turn influenced their German contemporaries who were inspired by the elegance and lyrical possibilities of the new French instrument, especially in the expressive tenor register.

This recording includes a world-premiere of the Irish Air Eileen Aroon, arranged for bassoon and continuo by Handel's first violinist in Dublin, Matthew Dubourg. This beautiful melody subsequently became very popular in Europe and inspired compositions by both Haydn and Beethoven.

Principal bassoon with the Scottish Chamber Orchestra since 2008, Whelan has received frequent praise from the critics: ‘Peter Whelan combines agility with lyricism and laid-back grace' (Gramophone).

Equally at home on modern and historical instruments, Whelan has a diverse repertoire spanning over four centuries and is in constant demand as a soloist and chamber musician. He has received glowing responses from audiences and critics across the globe, including a Gramophone Award for his recording of the Vivaldi Bassoon Concertos with La Serenissima.

Whelan is the founder and artistic director of Ensemble Marsyas whose debut album of Zelenka Sonatas received a Supersonic Award and was named BBC Music Magazine's 'Chamber Choice'.

Late Baroque composers were attracted by the expressive character of this mellow, darkly coloured instrument, and Peter Whelan explores its potential with affection and technical assurance...A variety of frivolités round off a splendid recital.

This programme of 18th-century music...demonstrates the bassoon's capabilities to conjure a variety of colours and moods that any serious-minded artist can be proud of...My jaw dropped at the dexterous virtuosity of Whelan's playing...Baroque chamber music showcasing solo bassoon might not sound like an obvious winner but in the event it's a triumph.

Whelan and his colleagues deliver full-blooded and highly virtuosic accouns of the Boismortier, Fasch and Telemann. The slow movements are appropriately gentle, too...Supremely agile, spirited and good-humoured performances.

Technical traversal is something taken for granted in his performances – he is the Indiana Jones of bassoon playing – but allied to this is his splendid sense of legato...Though the focus is inevitably on Whelan, it would be quite wrong to omit a salute to Sarah McMahon (cello), Thomas Dunford (lute) and Philippe Grisvard (keyboard) who provide such articulate and deft colour-conscious collaboration.