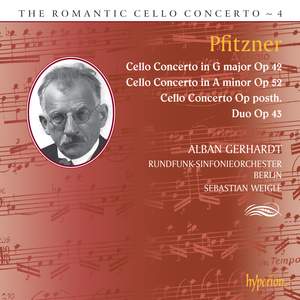 Gerhardt holds it all together with his sustained singing lines, while Weigle and his Berlin band provide vividly pointillist backing. — BBC Music Magazine, April 2014, 4 out of 5 stars More…

Hyperion’s Romantic Cello Concerto series continues to bring new works into a repertoire currently dominated by Dvorák and Elgar. Alban Gerhardt performs the three concertos by Hans Pfitzner, a composer remembered most for his opera Palestrina.

Pfitzner’s early Cello Concerto in A minor, Op posth., was scorned by his teachers (although liked by the composer himself) and the manuscript disappeared during his lifetime. It was first performed in public on 18 February 1977 and published the following year. His Cello Concerto in G major, Op 42, was written almost half a century later. Completed in 1935, this richly melodic single span was composed for the cellist Gaspar Cassadó (1897–1966), one of the finest cellists of his generation. This beautifully constructed concerto derives its material from the lyrical cello solo (heard over a quiet timpani roll) at the very start of the work. The orchestration is deft and often delicate, never submerging the solo instrument, but full of attractive surprises, not least the tumbling trumpet fanfares that introduce the first of the faster sections. The Cello Concerto in A minor, Op 52, is dedicated to Ludwig Hoelscher (1907–1996), a pupil of two giants of German cello-playing: Hugo Becker and Julius Klengel. It was completed in 1943 and published in 1944. Also included is a Duo for violin, cello and small orchestra.

Gerhardt holds it all together with his sustained singing lines, while Weigle and his Berlin band provide vividly pointillist backing.

Gerhardt is an unfailingly charismatic soloist, finding a sense of purpose where others might lapse into aimlessness, and the orchestral support is first-rate.

Gerhardt, a composed and elegant player...is at one with these scores and takes them all in his stride...The excellent Rundfunk-Sinfonieorchester Berlin under Sebastian Weigle earns top marks as a constantly sympathetic partner.

they belong, somewhat anachronistically, to Hyperion’s Romantic Cello Concertos, and Gerhardt plays them with enough conviction to make cello buffs want to give them a try.