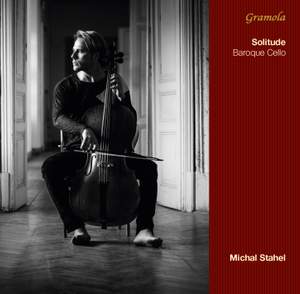 Gabrielli: Ricercare for Solo Cello No. 7

No. 8 in G Minor (diminutive version)

Francesco Scipriani: Sonate a 2 violoncelli: No. 11 in B Minor (diminutive version)

No. 10 in D Minor (diminutive version)

Solitude – works for Baroque cello solo, performed by the young Slovak cellist Michal Stahel on a period instrument made by Antony Posch in Vienna in the 1720s.

Besides solo sonatas, capriccios and toccatas by Domenico Galli, Domenico Gabrielli, Joseph Marie Clemens Dall' Abaco and Francesco Paolo Supriano and the Suite No. 5 for cello solo by Johann Sebastian Bach, Michal Stahel also performs his own works written in the Baroque manner such as La folia, 7 Variations in D minor for Cello solo. The Arpeggio in G Praeludium for violoncello solo in scordatura and Song of Solitude are based on texts for the oratorio Maddalena ai piedi di Cristo by Antonio Caldara (1670-1736).