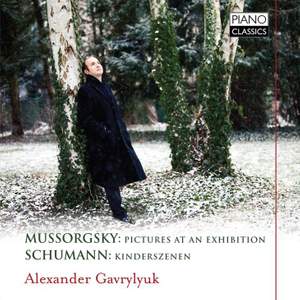 For his second album on Piano Classics, Alexander Gavrylyuk has chosen a visual and imaginative programme: the unusual but logical pairing of two romantic cycles, Mussorgsky’s Pictures and Schumann’s Kinderszenen. In Mussorgsky, Gavrylyuk unleashes his immense physical and creative powers to evoke the Russian scenes with which painter Hartmann inspired the composer: from the innocent children’s play, the mysterious old castle, the quarrelling market vendors to the grotesque gnomus, the netherworld of the Catacombae, the menacing evil of Baba Yaga to the monumental Great Gate of Kiev. In Schumann’s Kinderszenen Gavrylyuk draws with a fine pencil the scenes from a child’s world, tender, innocent, joyful, the disc suitably closing with the moving Der Dichter Spricht.