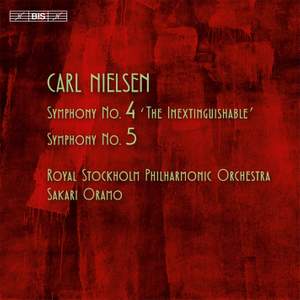 Oramo certainly knows how to generate and sustain a good current. Both of these symphonies are conceived as strong, purposeful wholes...Oramo also has a truly admirable way with phrasing Nielsen's... — BBC Music Magazine, May 2014, 4 out of 5 stars More…

In 1962, when Leonard Bernstein chose to record Carl Nielsen’s Fifth Symphony, this provided the composer with a wider international breakthrough some thirty years after his death. The work has since been hailed as one of the greatest symphonies of the twentieth century, but at its first performances during the early 1920’s audiences were less enthusiastic, finding it puzzling and difficult to understand. Although unwilling to provide an explanation of the symphony, Nielsen had however inscribed a kind of motto, ‘Dark, resting forces – Awakened forces’, at the end of his draft score and later wrote that it was ‘something very primitive I wanted to express: the division of dark and light, the battle between evil and good.’ Some eight years earlier, as he began work on his Symphony No.4, similar thoughts had been stirring in the composer. In 1914, with the First World War about to engulf Europe, he had written to his wife about a work with which he hoped to express ‘what we understand by the life-urge’. Giving it the title ‘The Inextinguishable’ at its publication, Nielsen later explained his intentions further: ‘If the whole world was destroyed, Nature would once again begin to beget new life and push forward with the strong and fine forces that are to be found in the very stuff of existence… These “inextinguishable” forces are what I have tried to represent.’ These two central works in Nielsen’s production have now been selected for the first instalment of a complete Nielsen cycle by Sakari Oramo and his Royal Stockholm Philharmonic Orchestra. Having enjoyed a close collaboration since 2008, this team has become ever more fine-tuned, as demonstrated on their previous BIS release, a performance of Edward Elgar’s mighty Second Symphony which was praised by the reviewer in Gramophone for ‘playing of conspicuous finesse and commendable ardour’ in an ‘abundantly characterful, cannily paced and deeply sincere traversal’.

Oramo certainly knows how to generate and sustain a good current. Both of these symphonies are conceived as strong, purposeful wholes...Oramo also has a truly admirable way with phrasing Nielsen's long lines - his melodies are rarely as predictable as their opening motifs suggest.

Oramo's pathway through these incendiary works is valiant and thoughtful - even if he point-blank refuses to emerge from the skirmish with a bloodied nose...who could blame Oramo for wanting to carve out terrain to call his own?

these are thrilling performances...Oramo’s grip on the music never fails, and he sees the [Fifth] symphony through to its hard-earned conclusion. These are central works in the canon of the 20th century symphony, and these recordings are a truly significant contribution to their performance history.

this first instalment of a full set of the Nielsen symphonies suggests it could be very special: the performances have an irresistible momentum...In both symphonies the Stockholm orchestra responds wonderfully too.