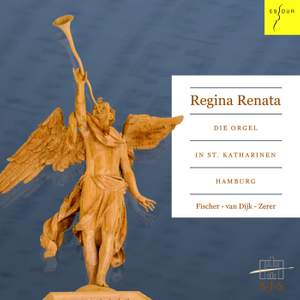 Regina Renata - the reborn Queen. The rebuilding of the Renaissance/Baroque organ in Hamburg’s main church St Catherine, which was almost completely destroyed by air attacks in 1943, has been a unique event for the international organ world. And here the reborn organ is heard in all its glory in performances by three highly distinguished organists, Andreas Fischer, St Catherine’s current cantor and organist, Pieter van Dijk and Wolfgang Zerer. Never before in the history of organ building has a historical instrument of this size been rebuilt in its original design and in its original location after it had disappeared and been replaced by another organ. Once again Hamburg thus possesses two representative instruments from the heyday of Hanseatic organ building, and so can regain its successes of the 17th and 18th centuries after losing its primacy as a European organ metropolis after the Second World War. On this recording Wolfgang Zerer plays music by Heinrich Scheidemann and Dutch organist Pieter van Dijk performs that of Jan Adam Reincken, both composers who were active at St Catherine’s. They also both play pieces by J S Bach while Andreas Fischer, organist of St Catherine’s since 1994, takes on more recent repertoire by the 19th and 20th century organist/composers, Heinrich F Degenhardt and Hugo Distler. All three interpreters were members of the rebuilding planning team for almost 20 years so it is no surprise that they chose works that are naturally closely connected to the great history of the St Catherine’s organ.