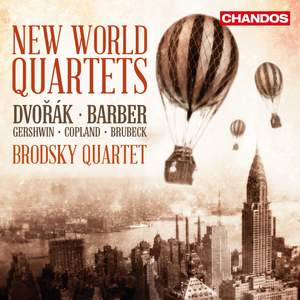 the most persuasive playing comes in the shorter items. Gershwin's sultry Lullaby is nicely contrasted with the spicy seasoning and rhythmic zest of Copland's Two Pieces and the 'Hoe-Down' from... — Gramophone Magazine, March 2014 More…

James selects some of his favourite recordings of the music of the quintessentially American composer, Aaron Copland.

The Brodsky Quartet, continuing to pioneer unique repertoire on Chandos Records, presents a programme of works from the ‘New World’ that explores an American sound in the string quartet. The earliest piece on the disc is the American String Quartet, in F major by Antonín Dvořák, the only non-American composer in the release.

His attempt to capture an American sound results in music of notable simplicity, directness, and good humour. In the String Quartet by Samuel Barber we hear an unashamedly romantic composer displaying a more European style. The central Adagio has become enormously popular in an arrangement for string orchestra. Far more distinctively American in idiom is the music of George Gershwin whose Lullaby was his first attempt at classical composition. Copland’s Two Pieces, a work written as a tribute to Gabriel Fauré, is featured along with an original arrangement by members of the Brodsky Quartet of his Hoe –Down. This famous work is enormously evocative of rural America and is heavily indebted to traditional tunes from Celtic settlers. Dave Brubeck is best known as a jazz pianist but he employs his classical training in Regret, which evokes the soundworld and emotional depth of the high baroque style while creating a unique link between the worlds of classical and jazz.

the most persuasive playing comes in the shorter items. Gershwin's sultry Lullaby is nicely contrasted with the spicy seasoning and rhythmic zest of Copland's Two Pieces and the 'Hoe-Down' from Rodeo

An ideal performance of Copland's Two Pieces from the Brodsky Quartet, full of character and remarkable virtuosity. They also treat us to a cheeky arrangement for string quartet of the Hoe-Down from the ballet Rodeo.