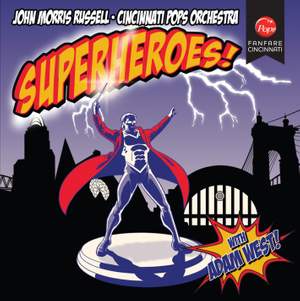 Iron Man 2: I am Iron Man (arr. R. Pellett for choir and orchestra)

Superheroes!, the latest release from John Morris Russell and the Cincinnati Pops, showcases some of Hollywood’s grandest musical scores from recent blockbusters such as The Avengers, The Dark Knight, Iron Man 2, X-Men: The Last Stand, Thor, Spider-Man and Captain America: The First Avenger, and also features themes from television and film classics including The Adventures of Superman, Wonder Woman, The Incredible Hulk, Batman, Super Friends and more. This action-packed collection, with a special ‘appearance’ by Adam West, pays tribute to the heroes of our imagination and celebrates the wonderful creativity of Hollywood’s most accomplished and acclaimed composers.