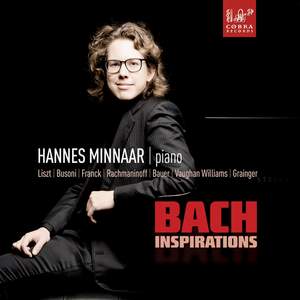 early contender for Gramophone instrumental record of the year. Why? The recorded piano sound is a real pleasure to hear; the programme is artfully conceived...lastly, every single performance... — Gramophone Magazine, January 2014 More…

Since the pianist Hannes Minnaar got the third prize awarded to him in 2010 during the Queen Elisabeth Competition in Brussels, his star - nationally and internationally - is rising. In 2010 his first CD appeared. In 2013 - the year he made ​​his debut with the Royal Concertgebouw Orchestra - his second CD appeared: Bach Inspirations.

Minnaar's choice of Bach for piano is very varied. In addition to a some very famous pieces, such as the choral arrangements of Busoni and Franck's Prelude, choral et fugue, he chose the less known and quirky versions of Bauer and Vaughan Williams. These composers - and that also applies to Rachmaninoff - jump more easily with the original work and clearly express their own romantic stamp on Bach.

Minnaar now plays with the big orchestras and works with conductors such as Marin Alsop, Jan Willem de Vriend, Edo de Waart and, in his debut with the Royal Concertgebouw Orchestra, Herbert Blomstedt. He is also active as a chamber musician. With Van Baerle Trio he is working on his international career.

early contender for Gramophone instrumental record of the year. Why? The recorded piano sound is a real pleasure to hear; the programme is artfully conceived...lastly, every single performance by this 28-year-old Dutch pianist is out of the top drawer.