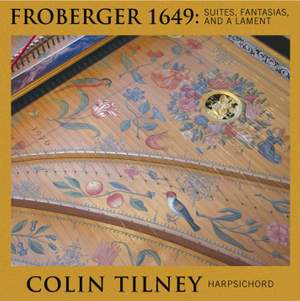 Froberger: Suite No. 1 in A minor

Froberger: Suite No. 2 in D minor

Froberger: Suite No. 3 in G major

Froberger: Suite No. 4 in F major

Froberger: Suite No. 5 in C Major

“People loved him because of his good nature, even if they did not understand his art.” Thus wrote Sibylla, Duchess of Württemberg, Froberger’s last patron and his “humble forsaken pupil”. She places a finger squarely on two fundamental aspects of Froberger’s life: his modest and unostentatious character and the extreme subtlety of his music. A pupil of Frescobaldi and exponent of Couperin, Froberger’s complete works remained unpublished until 1897 and it is only in the last half-century that more and more keyboard players have started to feel the persuasion of his secret and inward music.

The present recording explores some of the music in the earliest of the three surviving Froberger autographs housed in the Austrian National Library, the Libro Secondo of 1649.

Colin Tilney is internationally known for his harpsichord, clavichord and fortepiano playing, with many solo recordings on DG (Archive), EMI Electrola, Decca, Hyperion, Dorian, etc. For Music &Arts he earlier recorded Bach’s English Suites on an antique Italian harpsichord, the French Suites on clavichord, an album of fugues by Bach and his forerunners, and a Scarlatti disc.