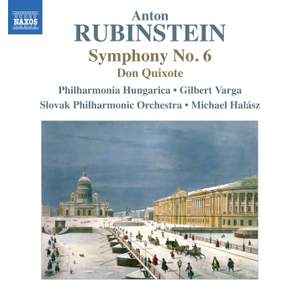 The recordings sound a bit faded, like Rubinstein's music, though it has bright moments. The players add gusto to the Symphony, but the Quixote tone poem droops. — BBC Music Magazine, February 2014, 3 out of 5 stars More…

Few Russian musicians in the second half of the nineteenth century could match the eminence of Anton Rubinstein. As a piano virtuoso he was internationally admired, as a progressive educator he had profound influence, and as a composer he was both significant and successful. The Symphony No. 6 in A minor, Op. 111 was his last symphony, composed in 1866, and fully revealing those qualities of grace and energy, as well as clever scoring, that make his works so appealing. Don Quixote, described by Tchaikovsky as “very interesting, and perfect in places”, is an inventive and charming musical portrait of Cervantes’ fictional knight. This release completes the reissue of all six Symphonies 8.555394 previously available on Marco Polo.

The recordings sound a bit faded, like Rubinstein's music, though it has bright moments. The players add gusto to the Symphony, but the Quixote tone poem droops.

this disc of his sixth and final symphony shows, though his style was not particularly Russian...it was certainly fluent, and sometimes fiercely dramatic...The large-scale humoresque for orchestra based upon Cervantes is intriguing, too