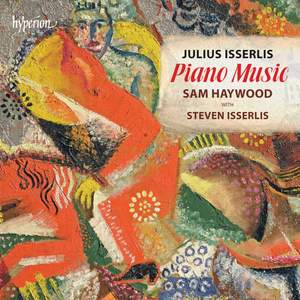 Haywood, fortunately, isn’t tempted to make more of these pieces than is wise. He plays them with consummate sensitivity, and has been well recorded. Isserlis seems to have been a charmer and,... — MusicWeb International, 25th March 2014 More…

No 04 in B minor. Allegretto

No 06 in F minor. Allegretto

No 07 in F minor. Allegro vivace

No 08 in E flat major. Andante

No 10 in G minor. Allegretto

Isserlis, J: Ballade in A minor

III. The flight of the swallow

I. The lonely brook in the forest

II. In the Steppes

IV. Once in autumn

In 1989 the young pianist Sam Haywood was awarded the Royal Philharmonic Society’s Julius Isserlis Scholarship. Years later, having become friends with Julius’s grandson Steven, Sam came across some of Julius’s piano compositions in a drawer at the house of George, Julius’s son. The editions were unclear and full of printing errors; so, struck by the beauty of the music, Sam decided to make his own edition, the fruits of which are to be heard on this recording.

Julius Isserlis was born in 1888 in Kishinev (now Chisinau in Moldova, though then part of Russia). He studied with, among others, Taneyev and Widor. As a Jew, he was exiled from Moscow, escaped from Vienna in 1938 and spent the rest of his life in London.

Isserlis’s greatest passion was for the music of Frédéric Chopin, who seems to have been his strongest influence. Nevertheless, his music retains its own very distinctive voice. Many of the short pieces are in minor keys and are pervaded by a yearning melancholy reminiscent of Slavic songs and folk dances. The playful virtuosity of several of the works is an indication not only of Isserlis’s own agility on the keyboard but also of that of their dedicatees (including Pablo Casals, who inspired the Ballade for cello and piano for which Sam Haywood is here joined by Steven Isserlis).

Haywood, fortunately, isn’t tempted to make more of these pieces than is wise. He plays them with consummate sensitivity, and has been well recorded. Isserlis seems to have been a charmer and, musically-speaking, a miniaturist and his works reflect an interesting channel to composition in Russia in the first two decades or so of the twentieth-century.