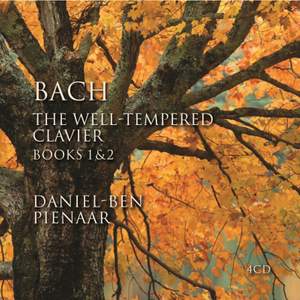 These are, in short, fresh, spontaneous, original readings that shed new light on the keyboard player's Bible. — BBC Music Magazine, February 2014, 5 out of 5 stars More…

South African-born, London-based pianist Daniel-Ben Pienaar is a completist. He has surveyed, both on the concert platform and in the recording studio, Mozart’s Complete Sonatas (AV2209), Chopin’s Complete Waltzes, Schubert’s Complete Sonatas, and the complete keyboard works by Orlando Gibbons. For Avie he has also scaled the heights of Beethoven’s Diabelli Variations (AV2260) and Bach’s Goldberg Variations (AV2235). The Royal Academy of Music professor now adds Bach’s Well-Tempered Clavier to the list, enhancing a growing discography that has earned him plaudits from around the world.

These are, in short, fresh, spontaneous, original readings that shed new light on the keyboard player's Bible.

Pienaar plays with the basic pulse, allowing little expansions and contractions...[He] particularly enjoys the more relentless of the fugues...Pienaar's WTC is impressive and full of lively ideas.

I have to say from the outset that this is one of the most impressive cycles that I have ever heard. Throughout, Pienaar shows great musical integrity and intelligence. The general tenor of his performances is spontaneity and an improvisatory feel...Pienaar explores the full range of the piano’s potential.