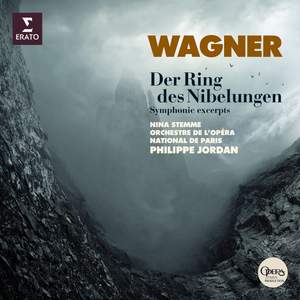 Wagner: Symphonic Excerpts from The Ring

the results are predictably front-rank. Jordan is one of our finest Wagner conductors today - he knows how it goes, how fast it should go and how to balance it...And Stemme...is in superb voice,... — Gramophone Magazine, February 2014 More…

Ride of the Valkyries

In June 2013 the Paris Opéra, under its music director Philippe Jordan, marked Wagner’s bicentenary with Der Ring des Nibelungen. It was the first time in more than 60 years that the company had performed the complete cycle under festival conditions. This programme of excerpts from The Ring, with Jordan conducting the Orchestra of the Paris Opéra, is rounded off with Brünnhilde’s Immolation Scene, sung by today’s leading Wagnerian dramatic soprano, Nina Stemme.

The Paris Opéra started building up to the 2013 Wagner bicentenary in 2010, when it launched a new production of Der Ring des Nibelungen, directed by Günter Krämer and conducted by the company’s music director, Philippe Jordan. The entire cycle of four music dramas was presented over 2010-2011, but in June 2013 – for the first time in more than 60 years – the Paris Opéra staged the Ring under festival conditions over a concentrated period.

Erato is marking the Wagner bicentenary with a spectacular programme of excerpts from the Ring. Philippe Jordan conducts the Orchestra of the Paris Opéra in instrumental music from all four music dramas in the cycle, including, of course, the thrilling Ride of the Valkyries and the magisterial Death of Siegfried; the programme reaches a worthy climax with the final scene of the entire work, Brünnhilde’s Immolation from Götterdämmerung, sung by the world’s reigning dramatic soprano, Nina Stemme.

When she sang the entire cycle in San Francisco in 2011, the New York Times wrote of her Immolation scene: “Ms Stemme took her singing to higher levels of burnished brilliance and expressive depth ... she was committed to the moment in every phrase she sang ...”. The Associated Press, meanwhile, felt that she “invited comparison with great past exponents of the role ... Stemme is a true dramatic soprano with a voice that is smooth and evenly produced throughout its wide range.”

Philippe Jordan, who made his debut (with Parsifal) at the Bayreuth Festival in 2012, spoke about his experience of conducting the Ring in an interview on the Paris Opéra’s website.

“It seems to me that if there is one work on which our views can evolve, then it is the Ring. When I look back on the very first cycle I conducted in Zurich, I have the impression that it was another opera. When you approach the Ring for the first time, you try to serve each work separately ... But that leads to an inevitable question when, having already circumnavigated the Ring, you once again face the prologue [to Das Rheingold]... Should one look to rediscover the purity and innocence of Das Rheingold, or, having made one’s way through the three other dramas, is it better to look for a unity in the cycle and bring out the sound of Götterdämmerung that is already there in the prologue?”

the results are predictably front-rank. Jordan is one of our finest Wagner conductors today - he knows how it goes, how fast it should go and how to balance it...And Stemme...is in superb voice, steely and passionate by turns.