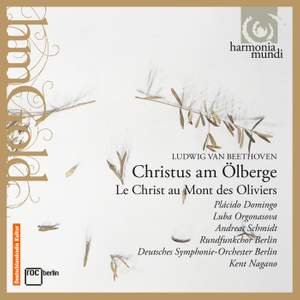 'Christus am Ölberge', text by Franz Xaver Huber, is Beethoven's only oratorio and an isolated piece in his overall output. He composed it early in 1803, shortly before his great Third Symphony and a few months before he began work on his only opera, 'Fidelio'. Huber chose the biblical accounts of Jesus and his disciples in the garden of Gethsemane and of Christ's capture there as the basis of his work.

Nagano is often very expressive… Both Fritz Wunderlich and Keith Lewis are more apt with their lighter, smoother, more beautiful voices… Orgonasova’s big, creamy, rounded voice provides its own thrills, especially as, despite its large size, it is very flexible… The chorus is excellent and very well placed in the sound picture to make the maximum dramatic effect.

Not perhaps Beethoven's best-known choral work, but a worthwhile piece nonetheless; this recording conducted by Kent Nagano features a spectacular trio of soloists including Plácido Domingo as Jesus, whose German pronunciation won't satisfy everyone, but who sings with glorious tone. The Rundfunkchor Berlin sing resplendently, with great playing from the Deutsches Symphonie-Orchester Berlin.

At its best, it is pure Beethoven...Placido Domingo and the radiant Luba Orgonasova are excellent soloists, and Kent Nagano conducts an eloquent performance.