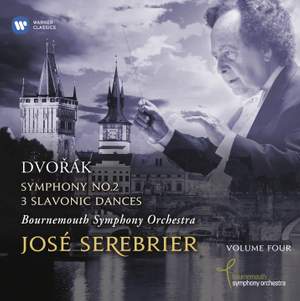 Serebrier considers the Symphony 'a masterpiece'; and his admiration for it is clear in this affectionate and lovingly shaped reading with the responsive Bournemouth Symphony Orchestra...with... — BBC Music Magazine, February 2014, 4 out of 5 stars More…

This recording of Dvořák: Symphony No.2 plus Slavonic Dances from José Serebrier and the Bournemouth Symphony Orchestra is the fourth volume in a projected series of Dvořák’s complete symphonies.

Written in a period spanning three decades, Dvořák nine symphonies had their numbering changed some fifty years after his death. The first four symphonies remained unpublished for many years, while the last five had been published during Dvořák‘s lifetime as Nos.1–5. Thus the famous No.9, “From the New World”, first appeared as No.5, and the D major, No.6, was introduced as No.1. These numbers remained in place until the middle of the last century, when the nine symphonies were at last renumbered according to their true chronology.

The Symphony No.2 in B flat major, op.4 was composed by Antonín Dvořák between August and October 1865. Dvořák sent the score to be bound, and the legend goes that he was unable to pay the binder, who thus decided not to return the score. The symphony finally had its world premiere in 1888 — its sole performance during the composer’s lifetime. It was conducted by Adolf Čech, who had previously conducted the premieres of Dvořák’s Symphonies 5 and 6.

Serebrier considers the Symphony 'a masterpiece'; and his admiration for it is clear in this affectionate and lovingly shaped reading with the responsive Bournemouth Symphony Orchestra...with its preface of spirited and sensitive accounts of three Slavonic Dances, this is a recommendable addition to Serebrier's impressive Dvorak series.

it’s just about the most lavishly played recording there is, with the Bournemouth Symphony in grandest form. The rich, wide strings, full and bold brass players, and overall luxury sound help confirm the symphony’s greatness.