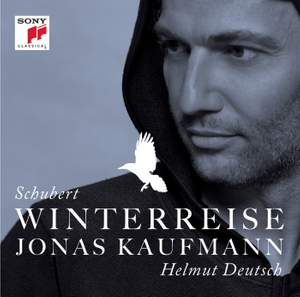 Kaufmann has come to this music at the right time...Each of these 24 songs is stamped with integrity and seriousness of purpose...The most striking qualities are its artless simplicity, its vocal... — Financial Times, 22nd February 2014, 5 out of 5 stars More…

Following the success of Jonas Kaufmann’s debut album on Sony Classical, The Verdi Album, Sony Classical are pleased to release its first recital disc with the world’s top tenor. Along with Franz Schubert’s earlier song cycle Die Schöne Müllerin, Winterreise is generally considered the composer’s greatest contribution to the Lied repertoire. The Winterreise song cycle (Winter Journey) is set to 24 poems by the poet Wilhelm Müller and was completed by Schubert a year before his death in 1827. After over 20 years of working together and countless performances of Winterreise, Jonas Kaufmann and his piano-partner Helmut Deutsch finally commit the Olympus of the Lied repertoire to disc. What started as a teacher-student relationship at the Münchner Hochschule für Musik und Theater has long since developed into a close professional partnership. Helmut Deutsch is recognised as one of the world's foremost Lieder pianists.

Jonas Kaufmann says about the work: “Against the background of all the horror stories that bombard us today, we are undoubtedly rather more hardened than Schubert’s contemporaries and yet even today’s listeners can still find this cycle affecting. Even as interpreters we always find ourselves sucked into the emotional undertow of these songs, although we know perfectly well what to expect. I think that Winterreise has the same sort of cathartic effect as a Greek drama: the emotional experience purges the soul. The work has an almost meditative effect on me, because Schubert expressed these emotional depths with a clarity and a simplicity that I ultimately find consoling and that allows me to regain my own inner balance.”

Following worldwide success in the Italian as well as in the German and French repertoire, today Jonas Kaufmann is regarded as the ‘king of tenors’. The Munich-born singer is, without a doubt, in the absolute top echelon of the operatic world – he is in extreme demand with the world’s most influential conductors and opera houses, selling out opera houses and concert venues months in advance, wherever he performs.

In addition to singing at the world’s leading opera houses (the Met, Scala, Vienna State Opera, Opéra de Paris, Royal Opera House London etc.), he also performs at the Salzburg Festival each year and reaches an audience of millions with broadcasts of opera in cinemas and on television.

In 2011 he received the Opera News Award in New York and was made a Chevalier de l’Ordre des Arts et des Lettres in France. Specialist journals such as Opernwelt, Diapason and Musical America, as well as the jury of the German ECHO Klassik, voted Kaufmann “Singer of the Year”. He received this honour in April at the first International Opera Awards in London and was at the same time the winner of the Readers’ Award. Kaufmann is also an internationally sought-after concert and lieder singer. His constant accompanist on the piano is Helmut Deutsch, with whom he has worked since they studied together in Munich. Among their countless lieder evenings, 30 October 2011 was a special date in musical history: it was the first solo recital to be given in the Metropolitan Opera since Luciano Pavarotti in 1994.

Austrian born pianist Helmut Deutsch taught at the Musikhochschule Wien between 1967 and 1979, before holding the position of Professor of Lied Song at the Hochschule für Musik und Theater München between 1986 & 2011. He regularly is invited to guest professor at various Universities. He is one of the leading authorities on Lied, and has won many prizes for his numerous recordings accompanying the world's top singers.

Kaufmann has come to this music at the right time...Each of these 24 songs is stamped with integrity and seriousness of purpose...The most striking qualities are its artless simplicity, its vocal poise and sheer musicality, drawing maximum purchase on the dark beauty of Kaufmann’s timbre.

For sheer vocal splendour, Jonas Kaufmann is unrivalled in Winterreise since Jon Vickers...[his] combination of vocal beauty and verbal sensitivity (his diction always a model), and the fastidiously textured and coloured playing of Helmut Deutsch, make this new recording an important addition to the vast Winterreise discography.

Recordings of this cycle by dramatic tenors are few and far between, and the result is staggering - as if Don José or Otello had decided against homicide in favour of raging through the snow!

Even shelves heaving with Winter’s Journeys should find space for Kaufmann’s...Few tenor versions of this great cycle are sung with such depth of tone, so wide a spectrum of colours or such a poetic a response to Müller’s texts. In Deutsch, Kaufmann has an ideal travelling companion.

There are plentiful examples of [Kaufmann's] artistry in his Winterreise, especially of his perfectly judged pianissimo singing and apparently infinite range of shading, while pianist Helmut Deutsch provides tactful support. But it's still all just a bit too theatrical

the German tenor’s stage experience shows in his vivid emotions and searing fortissimos. Lieder skills come through even more strongly. Words are clearly enunciated. Dynamics are carefully graded, along with the arc of each song. There’s also his close rapport with the responsive Deutsch...Flexibility and textual clarity are the two assets that put this Winterreise in the top class.

Every nuance of the text is reflected and enacted – so much so that some listeners may find the approach too ‘operatic’. Yet the vividness of the journey...is utterly convincing. A superb partnership, with recorded sound to match.