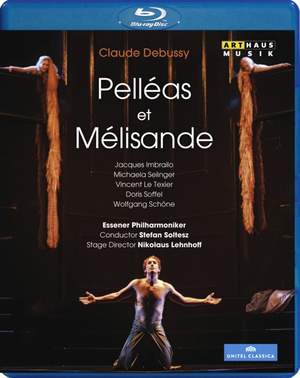 Imbrailo's Pelléas is a virile, romantic heartthrob, with fine voice to match. Mezzo-soprano Michaela Selinger follows the recent trend of shunning the blanched view of Mélisande, resulting in... — BBC Music Magazine, February 2014, 3 out of 5 stars More…

Music of introverted tenderness and a libretto that hints at much and offers few answers – such is Pelléas et Mélisande, Claude Debussy´s only completed opera, based on the play of the same name by the Symbolist and Nobel Prize winner Maurice Maeterlinck.

Staged in Essen‘s Aalto Theatre, this pioneering work of early modern times was a landmark. “Conductor Stefan Soltesz knows how to highlight these sensualist Debussy colours, let melody blossom, enthral with the magic of sound. And when these seraphic tones ring out from a stage fl ooded with light, we cannot help but leave the world far behind“, wrote the critics. The consummately precise staging by veteran stage director Nikolaus Lehnhoff has a cast to match these wondrous sounds. The characters seem to float through the scenes, bringing to the stage the unspeakable, the negation and extinction of their feelings, showing the people of this story in inescapable solitude.

This production stars the young South African baritone Jacques Imbrailo as Pelléas and Michaela Selinger as Mélisande, as well as Vincent Le Texier and Doris Soffel.

Imbrailo's Pelléas is a virile, romantic heartthrob, with fine voice to match. Mezzo-soprano Michaela Selinger follows the recent trend of shunning the blanched view of Mélisande, resulting in some red-blooded utterances, but she is no less affecting for that.

This DVD from Essen is remarkable for capturing the performances of the two young leads in the main roles. Jacques Imbrailo’s Pelléas is young, impulsive and fuelled by an all-consuming passion...Selinger’s Mélisande is excellent too. She acts the role as if inhabiting it from a distance, and there is something separate, almost out-of-body about her character, reinforcing the fact that Mélisande simply does not fit in