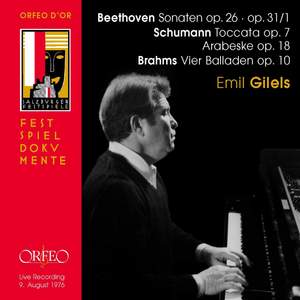 The Soviet pianist Emil Gilels began his international career at a relatively late date and impressed, in particular, with the carefully considered sense of unity and interconnectedness of his concert programmes. This was certainly the case in Gilels’ penultimate concert at the Salzburg Festival, in the summer of 1976. Beethoven’s middle-period sonatas can rarely have been heard in such a rounded, masterful interpretation, devoid of any superficial effects as is here. After the interval he moved on to Schumann and Brahms in far more than a mere musico-historical progression, as you would expect.