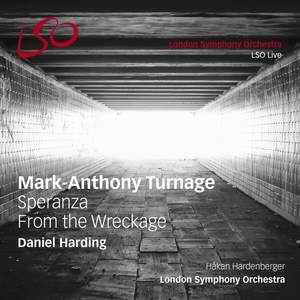 Turnage: Speranza & From the Wreckage

there is much to be said for hearing Hardenberger himself on commanding form. — Gramophone Magazine, January 2014 More…

Turnage: From the Wreckage

Recording of the Week,  Presto Personal Favourites from 2013

LSO Live presents the world premiere recording of Mark-Anthony Turnage’s large-scale orchestral work 'Speranza' (Hope), a piece commissioned by the LSO as part of Turnage’s residency with the orchestra in early 2013. Turnage is one of the most admired composers of his generation and has long been associated with the London Symphony Orchestra. Daniel Harding appears in his conducting debut for LSO Live.

'Speranza' is in many ways Turnage’s most ambitious and symphonic composition for orchestra to date. The piece is a monument to the power of optimism in a bleak world: "I started working on the piece while thinking about the absence of hope. I wanted to lift people up", says Turnage. Each of the four movements are titled ‘Hope’ in a different language: Arabic, German, Irish and Hebrew.

'Speranza' is coupled here with 'From the Wreckage', described by The Times as "outstanding: the music begins hellishly but gradually picks up a bluesy swing". Premiered in 2005, the original soloist, Håkan Hardenberger, reprises the role. The three internal sections of 'From the Wreckage' are marked by the soloist’s change of instrument – first flugelhorn, then trumpet, and finally piccolo trumpet.

there is much to be said for hearing Hardenberger himself on commanding form.

The sound is arguably the finest to have come from LSO Live in recent years, having a lustre and depth that highlight both Turnage’s orchestration and the LSO’s realisation of it to the best advantage… Readers are urged to acquire this disc and assess the qualities of Speranza for themselves.

From the Wreckage walks a tightrope of atonal angst and quirky jazz-like sounds. Håkan Hardenberger is magisterial...At some moments [in Speranza], you may feel as though you’ve been battered black and blue by Daniel Harding’s conducting baton, frantically poked and prodded by the sharp-edged string section of the LSO, and partaken in delightful revelry with the xylophonist.

There are some wonderfully haunting passages, and a quirky, rhythmic third movement that for me is the highlight of the work [Speranza]...the ease with which [Hardenberger] switches from a beautifully creamy flugelhorn tone to sweet-toned piccolo trumpet is just astonishing – a magnificent performance.

The Independent on Sunday 24th November 2013

Turnage’s orchestration is what colours this landscape. In Dochas he uses the oboe-like duduk, while the sombre, one-movement concerto moves to the light via the flugelhorn, trumpet and piccolo trumpet, insistent percussion representing both the heartbeat and the nervous jump.