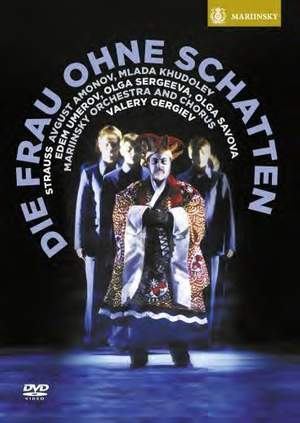 Gergiev coaxes some magnificent playing from his Mariinsky orchestra...But it's [his] attention to detail that really counts with nothing smudged or generalised in his reading of the score...Best... — BBC Music Magazine, January 2014, 4 out of 5 stars More…

In October 2013, the Mariinsky label releases a DVD & Blu-ray of Strauss’ most Wagnerian of operas, Die Frau ohne Schatten. Filmed in the historic Mariinsky Theatre in 2011, it stars Russian tenor Avgust Amonov as The Emperor, Mlada Khudoley as The Empress, Olga Savova as The Nurse, and is conducted by Valery Gergiev. The Mariinsky Theatre is one of the few opera houses capable of staging Die Frau ohne Schatten, due to the demanding soloist roles, elaborate sets and large orchestral forces required.

This epic production, premiered in 2009, is a collaboration between two British artists, director Jonathan Kent and designer Paul Brown, and has become a regular fixture in the opera company’s schedule. Kent has a long established relationship with the Mariinsky, and with Strauss in particular.

'Die Frau ohne Schatten' (The Woman without a Shadow) is an outstanding display of virtuosity, presenting one of Strauss’ most complex and colourful scores. The three-act opera, with libretto by Hugo von Hofmannsthal, is an exotic fairytale with a strong moral dimension, focusing on themes of the unborn and the supernatural. Avgust Amonov, who plays the role of The Emperor, has been a Mariinsky Theatre soloist since 2003. Prize-winner at the XIX International Glinka Vocalists’ Competition (2001) and the Irina Arkhipova Foundation (2004), his title roles include Shostakovich’s 'The Nose', Verdi’s 'Don Carlo' and Wagner’s 'Parsifal'. Soprano Mlada Khudoley was named “Singer of the Year” by the St Petersburg Theatre Society for her performance of the role of Sieglinde (Die Walküre) opposite Plácido Domingo in 2001. Her concert repertoire includes the soprano roles in Stravinsky’s 'Les Noces', Mahler’s Eighth Symphony and Beethoven’s Ninth Symphony. Russian mezzo-soprano Olga Savova joined the Mariinsky Opera Company in 1996, and was nominated for a Grammy award in 2001 for her recording of Prokofiev’s 'Semyon Kotko'. Her repertoire also includes the mezzo-soprano roles in Verdi’s Requiem and Berlioz’s dramatic legend 'La damnation de Faust'.

RECORDED at the Mariinsky Theatre, December 2011

Gergiev coaxes some magnificent playing from his Mariinsky orchestra...But it's [his] attention to detail that really counts with nothing smudged or generalised in his reading of the score...Best of all is Olga Savova's Nurse - artful, cunning and slightly sinister. A properly wicked fairy or Baba Yaga.

There's a lot of musical quality on show, not least from the virtuoso Mariinsky Orchestra, and Gergiev clearly knows how the piece goes, even if he favours speedy efficiency over warmth. Khudoley has a beautiful, soulfully lyrical voice and Olga Sergeeva throws everything at her performance as Barak's wife, often with thrilling results.

Kent embraces the magical elements of the story...The strongest aspects of the casting...are the two dramatic sopranos, who are both excellent. Mlada Khudoley, in particular, is a marvellous Empress...Umerov sings Barak’s music very beautifully...The best musical performance comes from the orchestra, however.

Sergeeva...I cannot remember so utterly credible a characterization of this hugely complex role. Mlada Khudoley has all the notes for the Empress and bags of spirit—she performs the long third-act melodram complete. Her sound is not consistently ‘beautiful’, but I’d rather have spirit.