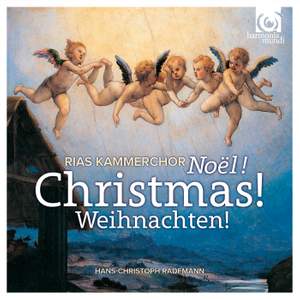 The singing, all unaccompanied, has a natural, unforced eloquence, and is of a standard which makes criticism an impertinence. An outstandingly accompanied issue. — BBC Music Magazine, Christmas Issue 2013, More…

The great painters have always known how to combine the different perspectives of the Nativity into a single picture. Here the RIAS Kammerchor tells the Christmas Story in music: Mendelssohn frames the painting, to which the darkness and the promise of promise of heavenly light form the background. The Virgin Mary leads us to the heart of Christmas Night and to rejoicing at the Saviour’s birth. We come full circle with the Four Motets of Poulenc, which sum up all the facets of Christmas and its emotions.

Founded in 1948 under the auspices of ‘Radio in the American Sector’, the RIAS Kammerchor played an important role in the revival of post-war musical life in Berlin. The core of its repertoire is the music of the Baroque era, together with the modern classics and the music of today. It swiftly acquired an international reputation for premiering new works by such composers as Penderecki, Reimann, Kagel, Gundermann and Tan Dun.

The singing, all unaccompanied, has a natural, unforced eloquence, and is of a standard which makes criticism an impertinence. An outstandingly accompanied issue.

The music is extraordinarily wide-ranging and has been exceptionally well chosen and sequenced… the result is an unmitigated joy- the performances are immaculate and most expressive, particularly of Poulenc’s four motets ‘pour le temps de Noel… a performance that could not, in my opinion be improved upon. This is an truly outstanding disc

A Christmas concept album, taking us from darkness to fulfilment and reflection...the voices of the Berlin-based RIAS Kammerchor turn in atmospheric performances.