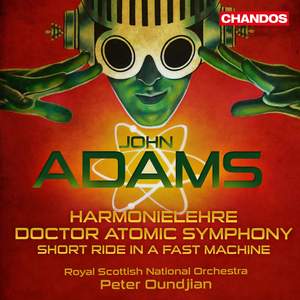 the RSNO under Peter Oundjian manage very effectively to project this single sweep of sound from beginning to end. Brass and percussion stand out for all the right reasons...but it's really a... — Gramophone Magazine, February 2014 More…

In this new release Peter Oundjian and the Royal Scottish National Orchestra tackle two seminal works by the American composer John Adams. Harmonielehre, a symphony in all but name, is an expansive, richly expressive, and often breathtaking work. It takes its title from a 1911 text by Arnold Schoenberg on harmonic theory and evokes the lush soundworld of that composer’s early tonal period. Also heard throughout the score are echoes of Mahler, Wagner, Strauss, Sibelius, Debussy, Ravel, and Stravinsky. The piece also takes inspiration from some of Adams’s own strange and surreal dreams. The Doctor Atomic Symphony, based on Adams’s controversial opera Doctor Atomic, focuses on the character of the physicist J. Robert Oppenheimer as preparations are made for the first test of the atomic bomb.

Although played without a break, the symphony falls into three distinct sections: ‘The Laboratory’, ‘Panic’, and ‘Trinity’. The symphony’s concluding section takes its title from the name given to the bomb test site by Oppenheimer himself, with reference to a deeply spiritual John Donne sonnet. This poem is set to music at the end of Act I of the opera and here in the symphony the aria’s intense vocal line is performed by solo trumpet. Also featured on the disc is John Adams’s energetic fanfare Short Ride in a Fast Machine.

the RSNO under Peter Oundjian manage very effectively to project this single sweep of sound from beginning to end. Brass and percussion stand out for all the right reasons...but it's really a sense of collective unity imparted by the orchestra during the loud sections that is most impressive.

The music is played with huge élan by the RSNO...The results are highly charged and exciting performances of three works that place Adams at the very forefront of American contemporary classical music and deservedly so.