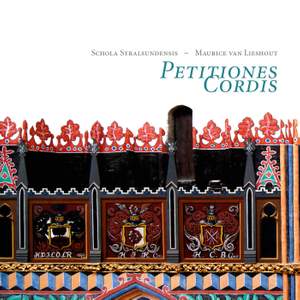 The manuscript Stralsund MS 229, which dates from 1585, is a collection of sacred motets held in the Stadtarchiv of Stralsund, a German Hanseatic town on the Baltic. There were probably six part-books originally, but only four have survived.

The manuscript contains 105 works, composed mainly for five or six voices. It spans several generations of composers, from the late fifteenth to the end of the sixteenth century; it therefore includes works composed before and after the Reformation. The variety of styles is impressive, ranging from early Franco-Flemish polyphony to Italian madrigals and works from central Germany.

In order to bring back to life the many famous or less well-known gems of the manuscript, the founder of Schola Stralsundensis, Antonie Schlegel, and its musical director, Maurice van Lieshout, have tirelessly researched and compared sixteenth-century manuscript and printed scores all over Europe. The programme recorded here contains a wide selection of works from the manuscript. The title Petitiones cordis comes from Eucharius Hoffmann’s motet setting of Psalm 37: In Domino spera et fac bonum, delectare in Domino, et dabit tibi petitiones cordis tui (Put thou thy trust in the Lord, and be doing good. Delight thou in the Lord: and he shall give thee thy heart’s desire). The repertoire has been recorded at its historical place, the church of Saint-Nicolas in Stralsund, where Hoffmann was Kantor.