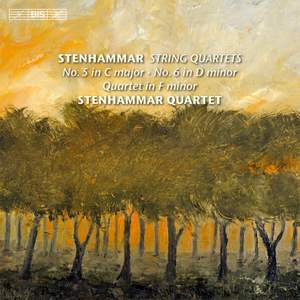 A charming and repeatable release where No. 6, especially, deserves to be better known. — Gramophone Magazine, January 2014 More…

After the harmonic and technical audacities of his Fourth String Quartet, Wilhelm Stenhammar evidently felt the need to explore other paths. Thus, in the Fifth Quartet, he makes a new beginning, as indicated by the title ‘Serenade’ that he uses in the autograph score, placing the work in a world of apparent lightheartedness, and even ironic detachment. Unusually for the composer, the primary focus of the work is on the slow second movement, the Ballata. This is based on a song that Stenhammar had learned as a child: the tragicomical ballad of the knight Finn Komfusenfej, whose wooing of a noble maiden proves highly complicated – and in the end fatal. Wide-ranging both in substance and in musical character, the Ballata is framed by three briefer movements which all in different ways play with elements of the quartets of Viennese Classicism, by Haydn, Mozart and Beethoven. Stenhammar thus distances himself from late-Romantic conventions – a development which is carried even further in his sixth and final work in the genre. Here ‘Romantic’ melodies and hovering Impressionist sonorities confront each other and are ultimately synthesized to form a single sound world, while Stenhammar’s extensive studies of counterpoint enable him to achieve a truly democratic four-part texture. On this second disc of the Stenhammar Quartet’s survey, these two late works frame a world première recording, namely that of the Quartet in F minor which Stenhammar completed in 1897, but withdrew after a successful first performance in 1898. While describing the quartet’s middle movements as ‘fresh and joyful’, Stenhammar expressed severe doubts regarding the final movement and for a long time harboured the idea of replacing it, before finally giving up on the work. The first modern performance of the quartet took place in 2001, and now the Stenhammar Quartet is offering a wider audience the opportunity to judge for itself.

A charming and repeatable release where No. 6, especially, deserves to be better known.

There is no doubting that the Stenhammars have set the bar high in this repertoire, their musicality informing every bar of the music. They have obviously lived with these works and have a sense of shared purpose. The music feels as if it is freshly composed...Anyone with an interest in Nordic chamber music, could do no better than explore these interesting works.