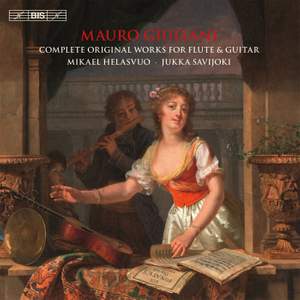 I. Theme and Variations

In the beginning of the nineteenth century the guitar enjoyed a wide popularity, partly as a result of the rise of domestic music-making. Besides solo music, a great amount of chamber music was being composed for guitar with voice, violin, piano or flute. The most celebrated of the several composer-guitarists active at this time was Mauro Giuliani, born in 1781 in southern Italy. Giuliani came to Vienna in 1806 and left the city a good decade later, enjoying close contacts with many musical celebrities of the era, among them Hummel, Salieri, Weber and Beethoven. He is also said to have played trios with Rossini and Paganini. Giuliani’s production is largely unknown to audiences of today, with a few notable exceptions, such as the Duo Concertante, Op.85. This three-disc set includes his complete original works for flute and guitar, a collection so extensive that it in fact also makes Giuliani one of the most prolific flute composers of the early 19th century! As a composer, Giuliani is highly skilful, with more than a touch of Italian charm and a perfect sense of style and proportion. These works feature all the forms in fashion during the period, for example sonata form, rondo, variation, potpourri and minuet. As was customary, Giuliani borrows freely, especially from composers such as Rossini and Donizetti, but he also possessed great melodic skills of his own, and attractive tunes seem to have flown from his pen almost as easily as they did from Mozart’s. This lighthearted music is given wings by the flutist Mikael Helasvuo and guitarist Jukka Savijoki, both from Finland, in performances that were praised at the time of the original release – as three single discs – in for instance Classical Guitar, whose reviewer wrote: ‘Helasvuo and Savijoki achieve an ensemble that at times reaches near perfection … this is what good chamber music playing is all about.’