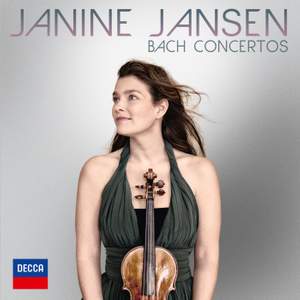 Jansens's approach is clearly influenced by the period instrument movement but by no means slavishly so...Sometimes there's a touch of creative tension between the historically-aware Jansen and... — BBC Music Magazine, January 2014, 4 out of 5 stars More…

Janine releases a brand new Bach recording, joined by a hand-picked group of friends – all exceptional musicians. This is energising Bach which is lustrous, new and vital made available in vivid, full studio-quality, sound.

Recording the popular E major and A minor concertos alongside the Violin and Oboe Concerto in C minor and two violin sonatas for the first time, Jansen and her ensemble explore these well-known works with a spirit of complete freshness. In the double concerto she is joined by two-time ECHO Award winner Ramón Ortega Quero. Janine’s ensemble accompaniment on the recording includes her brother, cellist Maarten Jansen, and her father, harpsichordist Jan Jansen

Janine has been a top selling artist since her debut recording in 2004 for Decca, and has sold more than 300,000 records. Her most recent album, a Prokofiev disc with the London Philharmonic Orchestra and Vladimir Jurowski, went Gold in the Netherlands soon after release last autumn

Jansens's approach is clearly influenced by the period instrument movement but by no means slavishly so...Sometimes there's a touch of creative tension between the historically-aware Jansen and her 'modern' violinist self...but there's a vivacity that invariably responds to the spirit of the dance.

this is a distinctive and personal celebration of Jansen's highly inflected playing in the company of friends...Most noticeable in the general concerto canvas is how Jansen's quixotic, bold and spontaneous toying with Bach so often finds itself checked by her 'friends'.

worth hearing for Jansen’s driving speeds, nimble ornamentation, energy and elegant sense of Baroque style. The textures are spruce, and a particular success is the C minor Double Concerto with the delectable tone of oboist Ramón Ortega Quero.

Jansen’s take on Bach is both fresh and comfortingly familiar...she achieves a rare combination of old-school glamorous sound and the outdoorsy briskness of period playing. Gorgeous.