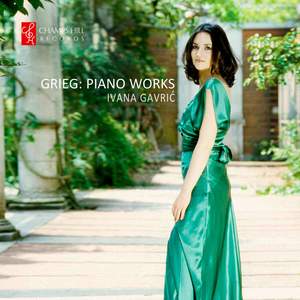 I. The Goblin's Bridal Procession, No. 14

IV. The Girls of Kivledal Folk Dance, No. 17

Award-winning pianist Ivana Gavrić's third album for Champs Hill Records is a very personal selection of repertoire including Grieg's Piano Sonata, the Ballade and a selection of his Lyric pieces. There is also a unique epilogue - a new piece written for Ivana (the first of a set of four) by RPS Award-winning composer Cheryl Frances-Hoad.

Grieg's Ballade is one of his darkest and most impressive extended pieces for piano. Although he never performed the work himself in concert, it was widely acclaimed, the German critic Walter Niemann describing the Ballade as “the most perfect embodiment of Norway and the Norwegian people, of its agonized longing for light and sun, and at the same time the most perfect embodiment in music of Grieg the man.”

Named Gramophone’s ‘One to Watch’ and BBC Music Magazine’s ‘Rising Star’, Ivana has performed on the major concert platforms in the UK, including The Wigmore Hall, Royal Albert Hall and Royal Festival Hall, as well as across Europe, in Canada, Japan and Russia.

Gavrić's accounts of...perennial favourites...are certainly appealing. More important is her commitment to music that remains unaccountably neglected...But perhaps the most revelatory music experience is contained in four of the extraordinary Slatter...Gavrić delivers an electrifying performance

she achieves an unforced eloquence that makes you more than question Alfred Brendel's unforgiveable reference to 'music for chamber-maids'...In short, Gavric possesses what I can only describes as a beautful musical personality, complemented by Champs Hill's excellent sound and presentation.

playing that is instinctively attuned to the moods and shades of the music.
She brings vitality and haunting atmosphere to the subtle inflections of the cameo images in six of the “Lyric Pieces”...the Sonata comes across with all its youthful exuberance, passion, winning lyricism and tender wistfulness.