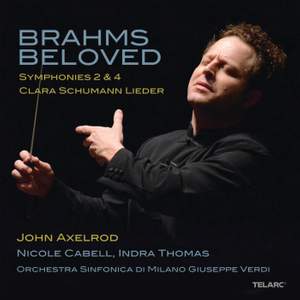 Symphony No. 2 exudes particular passion and vigour, with lively tempi that occasionally tax the ensemble cohesion...[No. 4] is less elegiac than usual, with a song-like lyricism, often at the... — Gramophone Magazine, Awards Issue 2013 More…

In an intriguing new concept for Telarc Classics, American conductor John Axelrod explores the music that surrounded the relationship between Johannes Brahms and the woman he loved, Clara Schumann. For this, the first release in the series, the Second and Fourth Symphonies are coupled with lieder by Clara sung by Nicole Cabell and Indra Thomas while Axelrod accompanies on the piano. The symphonies feature Axelrod conducting the Grammy Award-winning Orchestra Sinfonica di Milano Giuseppe Verdi.

Conductor John Axelrod believes that each of Brahms’ four symphonies inhabits a completely different, though connected, character. He has also come to the conclusion that the songs of Clara Schumann likewise fall clearly into four similar moods, and that they strongly reflect Clara’s own personality. That being the case, according to Axelrod it is possible to see the four Brahms symphonies as portraits of Clara and the same four different aspects of her character.

John Axelrod is Principal Conductor of the Orchestra Sinfonica di Milano Giuseppe Verdi, as well as Music Director of the Orchestre National des Pays et des Loire. A former pupil of Leonard Bernstein, he is one of today’s most in-demand conductors. Recent recordings have included a much-praised disc of music by Berlioz and Ravel with Veronique Gens and the ONPL for Ondine Classics, the album American Serenade also with the ONPL and violinist Rachel Kolly d’Alba for Warner Classics, and Gorecki’s Third Symphony with the Danish National Symphony Orchestra for Sony Classical.

Symphony No. 2 exudes particular passion and vigour, with lively tempi that occasionally tax the ensemble cohesion...[No. 4] is less elegiac than usual, with a song-like lyricism, often at the expense of Brahms's counterpoint, though with extra awareness of how harmonies are voiced.

The Fourth, with its “dark questing intensity” and orchestral playing that is more heavyweight than heavenly, is paired with songs performed by Indra Thomas.