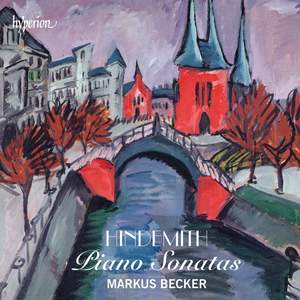 Becker commands the strcuture of each work, and if he finds less with than Gould in the lighter Second Sonata, he is still very impressive in the virtuosity of the Third...this profoundly rewarding... — BBC Music Magazine, December 2013, 4 out of 5 stars More…

Hindemith: Piano Sonata No. 1 in A

Hindemith: Piano Sonata No. 3 in B flat major

It was in the second half of Hindemith’s career—after the composition of the opera Mathis der Maler (1933–5) and the campaign against it by the Nazis which eventually forced his emigration from Germany—that Hindemith produced his major utterances for solo piano. In his three piano sonatas, all written in 1936, Hindemith presents himself not as the rebel and revolutionary of the 1920s, but rather as an heir to the contrapuntal skill and keyboard dexterity of Johann Sebastian Bach.

Markus Becker has been acclaimed for his persuasive and authoritative recordings of German repertoire of the late nineteenth and early twentieth centuries.

Becker commands the strcuture of each work, and if he finds less with than Gould in the lighter Second Sonata, he is still very impressive in the virtuosity of the Third...this profoundly rewarding music - like Becker's playing itself - repays the deeper acquaintance of repeated listening.

He makes a particularly cogent case for the rarely performed five-movement First Sonata, bringing a welcome lightness and textural transparency to the sometimes dour keyboard-writing...Becker's intelligent, characterful and texturally varied pianism adds up to one of the Third Sonata's finest recordings

His richness of tone and clarity of touch suits these Hindemith sonatas very well indeed, avoiding rough edges and dealing with technical difficulties with refinement and character. He takes his time over Hindemith’s more searching passages and movements without lingering beyond all reason