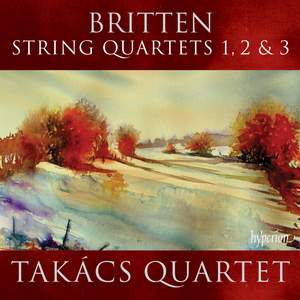 they do not disappoint in this beautifully recorded set, which couples raw intensity with subtle refinement...this release is highly recommended — BBC Music Magazine, December 2013, 4 out of 5 stars More…

I. Duets: With moderate movement

‘Arguably the greatest string quartet before the public today’ (The Sunday Times), the Takács Quartet have recorded much of the great Classical and Romantic quartet repertoire during their fruitful career. Now they turn to three masterpieces of the twentieth century.

The three quartets span the composer’s life, the first written in America and the second written at the height of Britten’s fame after the premiere of Peter Grimes. It was written to commemorate the 250th anniversary of Purcell’s death—a composer who was a lifetime inspiration to Britten—and the last movement is cast in the form of a huge Chacony. The third Quartet was written at the end of Britten’s life and refers specifically to his last opera, Death in Venice. Peter Pears described this haunting work as being ‘of a profound beauty more touching than anything else, radiant, wise, new, mysterious—overwhelming’.

they do not disappoint in this beautifully recorded set, which couples raw intensity with subtle refinement...this release is highly recommended

The pieces naturally suit the assertive tone of the Takacs Quartet, who are skilfully able to maintain a thread of musical argument not only through each individual quartet but through the collection as a whole.

There is a wonderful intimacy to both their playing and the recorded sound, but they’re not beyond making an unlovely sound when they need to... There is richness, depth, eeriness and beauty...The all-important sense of ambiguity, present to a greater or lesser degree in all of this music...is conveyed with the utmost delicacy and discretion

If they do not solve all the puzzles of these three works, which contain such contradictory elements that it is never easy to say what they are "about", the quartet offer the best possible guide to the music's beauty and complexity, giving listeners all they need to come to their own conclusions.

The players attack each one with their customary passion, panache and individuality.