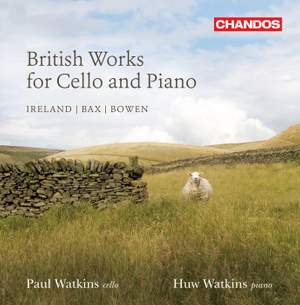 bathed in Chandos splendour, the Watkins brothers remain by far the best recorded guides to this powerful and enjoyable repertoire. — BBC Music Magazine, Christmas Issue 2013, 4 out of 5 stars More…

Bowen: Sonata in A major for Cello and Piano, Op. 64

This is Volume 2 in our series of British works for cello and piano, performed by the exclusive Chandos artist Paul Watkins, with his brother Huw Watkins on the piano. Acclaimed for his inspirational performances and eloquent musicianship, Paul Watkins enjoys a distinguished career as both a cellist and conductor. York Bowen was very nearly forgotten after his death in 1961 but his music, traditional in form, romantic in expression, and confidently idiomatic, has recently undergone a revival. In the Cello Sonata recorded here, he displays his particular skill in writing finales, as he drives the work to a flamboyant conclusion. Arnold Bax was at the height of his powers when, in 1923, he wrote his Cello Sonata in E flat. The work is particularly fascinating in the sense of restless movement that it creates, at one moment breaking out in savage dance, at another lapsing into romantic reverie. Much more concise is John Ireland’s Cello Sonata, tautly constructed and full of passionate intensity. As in the case of the other two sonatas, it places great virtuosic demands on both performers.

bathed in Chandos splendour, the Watkins brothers remain by far the best recorded guides to this powerful and enjoyable repertoire.

Paul Watkins and Huw Watkins have all this music in their very being and play here, as always, with great spontaneity. The Chandos recording is entirely truthful.

Three cello and piano masterpieces on one disc takes a lot beating … and I do not use the word ‘masterpiece’ lightly...Paul and Huw Watkins give hugely impressive and ultimately sympathetic performances of all three works.