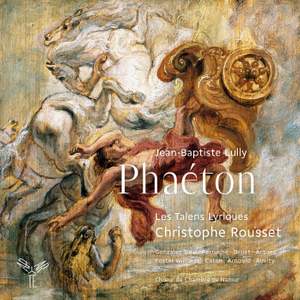 Perruche's Clymène is exquisitely sung, showing a command of ornamentation and full of passion. In general, all of the solo roles are dlivered with dramatic conviction and a strong sense of style...Rousset's... — BBC Music Magazine, January 2014, 4 out of 5 stars More…

Founded in 1991 by Christophe Rousset, Les Talens Lyriques are now internationally recognised for their excellence in the Baroque repertoire and their latest recordings in the genre, for Aparté, have earned them international acclaim. After the huge success of 'Bellérophon', they now present Lully's 'Phaéton', recorded at the Salle Pleyel in Paris in October 2012. The critics commented on the admirable clarity and precision of the performance, the perfection of the choruses, sung with veracity by the Namur Chamber Choir, and an ideal cast.

'Phaéton' was the eighth tragédie lyrique to emerge from the successful collaboration between Jean-Baptiste Lully and his faithful librettist, Philippe Quinault, and it is one of their most remarkable creations. First performed in 1683, it proved so popular that it was referred to as the ‘opéra du peuple’. As Christophe Rousset puts it, "Its airs were whistled at Versailles and on the bridges of Paris."

In keeping with the tastes of the time, the work is laden with allegory. Phaéton describes a young man’s temerity in wishing to drive the chariot of the sun god, his father, and his subsequent downfall. It presents a moral lesson and also served the image of the king: Jupiter brings to an end the chaos that prevails in the world, just as Louis XIV brought peace to Europe, while promising his people a Golden Age.

Perruche's Clymène is exquisitely sung, showing a command of ornamentation and full of passion. In general, all of the solo roles are dlivered with dramatic conviction and a strong sense of style...Rousset's flexible accompaniment is response to the drama. This disc comes highly recommended.

The colourful photographs give a luxurious feel to the package…Some fine haute-contre work from Cyril Auvity…What scope!

The music is anything but formulaic, and Rousset’s cast – led by honey-voiced tenor Emiliano Gonzalez Toro in the title role, Ingrid Perruche as Queen Climène and the swallow-voiced Isabelle Druet as Théone – is so attuned to the style that even the lengthy recitatives come across as undiluted musical delight.

there's much to enjoy here. As usual with Lully, the most appealing music is to be found in the choruses and dances, including a jolly chaconne...The cast is led by Emiliano Gonzalez Toro, whose light, haute-contre tones admirably convey Phaethon's ambition, arroagance and essential weakness...Andrew Foster-Williams's virile baritone is equally well suited to Epaphus.

In the opera's important and unfailingly lovely orchestral writing, the orchestra of Les Talens Lyriques, playing in the French Baroque configuration of five string parts, is startlingly good: lush, rich and highly disciplined...Despite its casting misjudgements, this recording should confirm Lully's reputation as an opera composer of the first rank.

The pace never falters in this dazzling account from Rousset and his elite period ensemble, and the singing is ideally stylish...it is in the dramatic Act IV encounter between Apollo (Cyril Auvity) and Phaëton (Emiliano Gonzalez Toro) where sparks really fly: two exceptional hautes-contre vying with each other for vocal supremacy.

You probably won't hear it better done. Very few interpreters capture the panache and grandeur of Lully's music as well as Christophe Rousset and his Les Talens Lyriques, and the energy and grace of the performance are immensely appealing, even in the work's less successful passages. It's spectacularly sung, too.

Rousset’s star is rising: this recording of Lully’s Phaeton confirms that he is an even better conductor than he is a harpsichordist ... Lully’s unadorned syllabic setting of Quinault’s text is given a beautifully clear reading by the singers. Les Talens Lyriques play with vigour and passion.