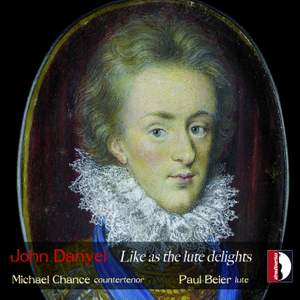 Danyel: Dost thou withdraw thy grace?

Danyel: Thou pretty bird, how do I see

Danyel: Mrs. M.E. Her Funerall Teares for the Death of Her Husband

Mrs. M.E. Her Funerall Teares for the Death of Her Husband: I. Griefe Keepe Within

Mrs. M.E. Her Funerall Teares for the Death of Her Husband: II. Drop Not Mine Eies

Mrs. M.E. Her Funerall Teares for the Death of Her Husband: III. Have All Our Passions

Danyel: I die whenas I do not see

Danyel: If I could shut the gate

Danyel: What delight can they enjoy

Danyel: He whose desires are still abroad

Danyel: Why canst thou not, as others do?

Why Canst Thou Not?

Danyel: Now the Earth, the Skies, the Ayre

From the liner notes by Paul Beier:

“The exceptional nature of the Danyel song book has, naturally, lead to its being particularly fortunate in modern discographic production, and the tendency has always been to present each work with the maximum forces possible. For the present recording I have decided to use a different approach. Although it is specified on the title page, I do not employ the bass viol: the sustained sound of the viol can easily eclipse the delicate plucking of the lute, rendering Danyel’s highly sophisticated counterpoint more difficult to appreciate. This makes for an altogether more intimate experience of the songs and shifts the focus to the subtle interplay between the literary text and the supreme artistry of John Danyel’s musical language. The sum total of Danyel’s known solo lute works is five, and two of these are of uncertain attribution. The two pavans are masterpieces showing the high level of Danyel’s attainment in the art of lute playing. It is not certain if the 'Daniell' of 'Daniells Jigge' is our composer; another possibility is the Elizabethan court lutenist, Daniel Bacheler. Of the three similar versions of Monsieurs Almain, named after a famous incident in the war of the Spanish Armada, two are attributed to Bacheler, but the earliest version, presented on this disc, is unambiguously ascribed to John Danyel”.

These performances are very much aligned with the tradition of voice and lute...The gain, I suppose, is a greater sense of sheer intimacy, and other musicians have taken this path as well. In that respect there could be few better guides than Michael Chance. He has a feeling and awareness for Elizabethan and Stuart lyrics second to none