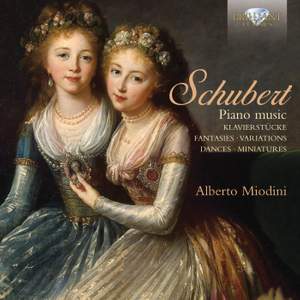 Schubert: Minuet in A minor, D277A

When we look past the extended meditations of the sonatas into the rest of Schubert's piano music, we tend hardly to see beyond the Wanderer Fantasy and the Impromptus. This undervalues the composer's contribution to the work for his instrument, as the Italian pianist Alberto Miodini reveals on an extensive exploration of the sometimes slighter and lighter but often just shorter works he composed through his all-too-short career. Perhaps the late Klavierstücke D946 are best known, and justly so, for their profound and ruminative contemplation, and Miodini's fellow-countryman Paolo Bordoni did sterling work for the Waltzes in 1970s recordings that stand the test of time, but there are still tantalising fragments that are no less worth hearing for their frustratingly unfinished status -- the 'Unfinished' Symphony was by no means the only musical project that Schubert filed in his creative bottom drawer, so fecund was his compositional imagination that he could hardly get the ideas out fast enough. As noted by Alfred Brendel, Schubert chose to interrupt a composition 'when it was unsatisfying or no longer interesting' -- evidence of the composer's vigorous pursuit of his own individual Sonata style. Among the complete works here are equally little-known variation sets on melodies by Hüttenbrenner and Diabelli -- works full of characteristically Schubertian energy and motive power.