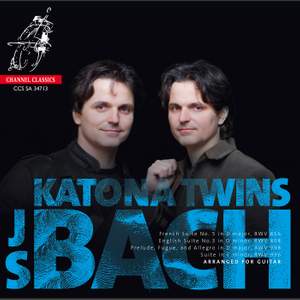 “These Hungarian twin brothers have everything one might wish for.” Gramophone

On this disk we recorded two duets and two solo works by J.S. Bach. The duets were originally composed for the harpsichord and the solo pieces for the lute. Because of the complexity and difficulty of lute works, many support the idea that these works were written for an instrument called the “Lautenwerck” or lute-harpsichord (a small harpsichord with a similarly shaped body to that of a lute). We know that Bach possessed at least two of these instruments, according to the inventory of instruments made at his death. He was also in contact with one of the most famous lutenists of the time: Sylvius Leopold Weiss, whose acquaintance might have contributed to the emergence of these works for lute.

The wide repertoire of the duo spans from Bach to Piazzolla’s tango music and their own arrangements of pop classics. Their programmes also include concertos for two guitars and orchestra by Rodrigo, Vivaldi, Piazzolla and Tedesco.

Several contemporary composers have written for and dedicated works to the Katona Twins. The Katona Twins have been invited on numerous occasions to record for the BBC and other international television and radio stations. They played together with renowned musicians such as Yo-Yo Ma and world class ensembles such as the BBC Concert Orchestra and the London Sinfonietta.

Pure quality. This is a thoughtful, balanced and beautiful recording...the brothers play with care and confidence, with expressive intonation, letting Bach’s wisdom shine through.