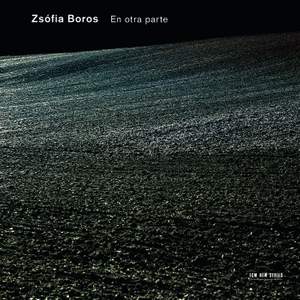 Reis: Se ela perguntar (If she should ask)

The evocative ECM debut of the outstanding young Hungarian guitarist Zsófia Boros addresses a broad range of composition for her instrument, on this recording drawing primarily on music of the Americas. “Often I think I am holding the choice of music in my own hands, but later I wonder if the music has chosen me as a medium. My approach is always very intuitive; when a piece of music grips or touches me, I want to reflect it - to become a mirror and convey it.”

At the centre of En otra parte is music of Leo Brouwer, the Cuban composer who views the guitar as an orchestra and once declared that it has “no limits”, a major reference for Boros from the beginning of her musical journey. She first heard “Un dia de noviembre” - here performed twice - at a concert when she was around 15 and playing the piece changed the nature of her relationship to music.

This sensitive solo recital opens with “Canción triste”, long a favourite amongst guitarists, by Francisco Calleja, the Spanish guitarist/composer who spent the last part of his life in Uruguay and Argentina. It also includes Ralph Towner’s “Green and Golden”, Vicente Amigo’s tribute to the spirit of flamenco (“Callejón de la luna”), a waltz by Brazilian Dilermando Reis, Quique Sinesi’s “Cielo Abierto”, inspired by the rhythms of candombe and milonga, and much more. Named for the poem by Roberto Juarroz, Todo comienza en otra parte (Everything begins somewhere else), Boros’s album was recorded in Lugano in 2012 and produced by Manfred Eicher.

Born in 1980, Zsófia Boros studied in Bratislava, Budapest, and the University of Music and Performing Arts in Vienna. She is the recipient of numerous awards, taking First Prizes at the North London Music Festival, the Concorso Internationale Val Tidone, the Paganini Competition in Parma, and the Premio Enrico Mercatali in Gorizia.